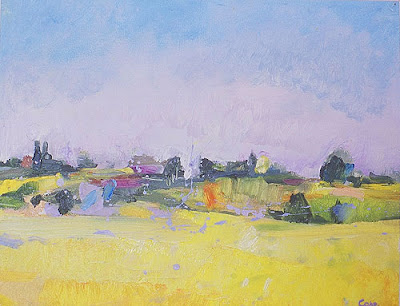 What happens to oil paints in sub zero temperatures

In answer to Stew’s question, what happens to oil paints in sub zero temperatures, it’s easiest to divide the question into three parts:
1. What happens to the paint whilst actually painting.
2. Whilst drying.
3. Whilst being kept/hung/stored3. Oil paintings like to be kept in moderate temperature, in daylight & with little humidity. Actually I’ve observed that oil paintings done on MDF board age very well, if properly primed with an oil-based thixotropic primer (acrylic primers tend to absorb & suck back the oil over the years. There is less sign of this with oil based primers in my exprience), as the rigidity of the board doesn’t dilate like the flexibility of canvas (where hence ‘craquelure’). If kept in extreme heat/cold any paint not 100 percent dry underneath the dry exterior crust will move whilst the hard crust won’t, hence another source of craquelure. Again less chance of craquelure on wood panel.
2. When drying, oil paints react with the oxygen to form a hard film called LINOXYN. They seem to like right light to dry to nice bright finish. None of my paintings are left outside to dry in extreme conditions, just properly & gently in moderate conditions.
1. Whilst actually painting. On lovely sunny temperate Dordogne spring days, you can feel the paint going tacky dry whilst painting. It’s the linoxyn forming & it’s a beautiful thing. In more extreme temperatures, this sensation is more difficult to detect. 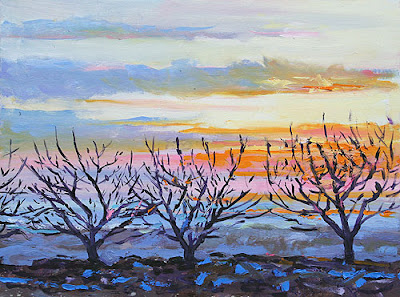 In subzero temperatures, the paint spreads more like hard butter from the fridge, despite the fact that oil freezes at much lower temperatures than water (watercolour in sub zeros are fun , form all sorts of icicles…which unfreeze when back inside & hence the watercolour actually dissolves & disappears). It’s all the wax & alumina fillers in the paint stiffening up. Just like honey. You have to push the brushes around that much harder & with more physical ‘ummph’. I was quiet pleased with some of the blending behind the status clouds in the above painting, this fine film plays of well against the thick impasto in the soil in the foreground.
In plus thirty degrees centigrade…… 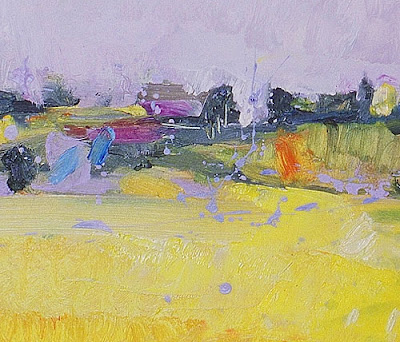 Plein-Air Painting in the Heat

In plus thirty degrees centigrade, there’s evaporation of the turpentine along with the wax going runny. Fun, as the paint feels more like watercolour! All runny & liquid. I did the above oil in 42 degrees centigrade. It was in 1997, I’d just emigrated to France at the same time as a close painter/picture restorer friend of mine (who I used to share studio with in Bristol UK, hence a little of his great knowledge of picture restoration was given to me) emigrated to Australia. I challenged him to a contest – who could paint ‘en plein air’ in the hotest conditions. We hung a thermometre on the easel. The above painting was done in the corn fields in the Dordogne, after the harvest. It gets very hot in the stubble. The farmers thought I was mad & in retrospect, I agree with them. But it was fun & the painting good.
Another way of charting heat whilst painting is how many litres of water. The above was about four litres of water & the sub zero was about a thermos of black tea. The real problem isn’t with the paint but the painter… in sub zeros, one can remain warm but the hands stop moving. Maybe all of this is manly bragging. Like Turner strapped to his mast in a sea-tempest. The essence of plein air painting (plein-air = fresh air or outside) is to catch something of the feeling of ‘being there’ . When this sentiment joins with that of making a picture…… things gel.