You will find inspiration for your art holiday in the Dordogne. It is a happy, sunny, tranquil part of the world, neither too hot nor too inclement. Much of the countryside remains unspoilt, with gentle rolling hills, dense woods, deeply romantic chasms & cliffs where the majestic river runs, sparkling like a jewel. The region offers painters so much to paint… ‘I found what I wanted to paint in the first five minutes!’ one student delightedly exclaimed. I first started calling this a painter’s paradise over fifteen years ago, and I still feel it is so.

A green & fertile land, still close to its agricultural roots. A marriage of the sunshine of the warm hearted South & the fertility of the West coast of the Atlantic ocean. ‘Terroir’… local particularity, produce, cuisine, people, customs, a sense of place & belonging, landscape, patina, authenticity. All this comes together to give wonderful agricultural products, beautiful cuisine & world renowned wines of Bergerac & Monbazillac AOC. The local markets are exuberant, colourful & overflowing, especially in late May. You will enjoy this shopping & sketching opportunity.

Pretty little villages such as Saint Avit Sénieur with charming vernacular architecture and enchanting gardens. Many chateaux & medieval churches, like dreams, vestiges of another time…

It’s the ‘other’ south of france. The South West  – unspoilt, less hectic, less well-known, off the beaten path. And with a softer, kinder light than the baked shores of the semi-sahara Provence.

Roland Barthes on the light of South West France:

… the grand light of the South West, both noble and subtle at the same time; never gray, never low (even when the sun isn’t shining), it’s a light-space, defined less by the colours by which it effects things with (as in the other Midi) than more by the quality of being imminently inhabitable that it gives to the land. I can not find other way than to say: it is a luminous light.  –  ‘La Lumière du Sud Ouest’ (my translation). 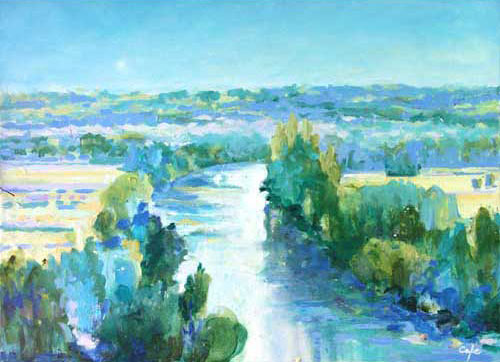 Flowing downriver westwards past Bergerac, the Dordogne is now generous & mature. You are in wine country, not far from St. Emilion & the Gironde. The ripening sun, fertile soils & the rich slopes of the left bank make some very delicious wines, which even the Romans knew about. Pastoral, french poly-culture mixed in with ancient oaks make it a great landscape for painters & gardeners. In the image below, you can see Le Chateau de Sanse on the hill above the vines & oaks as well as where we go out on a trip to paint beside the river Dordogne not far from the château.

St Avit is about half way between Bergerac & Sarlat, the town with the world’s highest density of UNESCO monuments. It’s on  honey coloured rock with rich red clay soils. The cliffs begin, the river meanders in great sweeps & the deep dark woods are full of mushrooms & the occasional Gruffalo. The land was forest & was settled in the medieval ages, so there’s old churches & abbeys, as the Pilgrim’s Path El Camino di Santiago runs from Rocamadour southwards. Long since inhabited by man, St Avit is not far from the prehistoric eponymous site ‘La Gravette’, the archeological findings from whence gave raise to The Gravettian Period (33000 – 16000 BP). Seventeen thousand years of human history…

Your art holiday at St Avit offers you the possibility to visit to a painted cave in the remote & rugged Vézère valley (as an optional extra day out). These caves are one of the highest points of mankind’s creativity. They speak to us of  our artist’s beginnings. To experience this is very humbling & moving for a contemporary artist. Adam will give an informal presentation on prehistoric art. The Vézère is the jewel in the heart of the Dordogne, a beautiful sight to see.

Henry Miller wrote about the Dordogne:

A few months before the war broke out I decided to take a long vacation. I had long wanted to visit the valley of the Dordogne, for one thing. So I packed my valise and took the train for Rocamadour where I arrived early one morning about sun up, the moon still gleaming brightly. It was a stroke of genius on my part to make the tour of the Dordogne region before plunging into the bright and hoary world of Greece. Just to glimpse the black, mysterious river at Dômme from the beautiful bluff at the edge of the town is something to be grateful for all one’s life. To me this river, this country, belong to the poet, Rainer Maria Rilke. It is not French, not Austrian, not European even: it is the country of enchantment which the poets have staked out and which they alone may lay claim to. It is the nearest thing to Paradise this side of Greece. Let us call it the Frenchman’s paradise, by way of making a concession. Actually it must have been a paradise for many thousands of years. I believe it must have been so for the Cro-Magnon man, despite the fossilised evidence of the great caves which point to a condition of life rather bewildering and terrifying. I believe that the Cro-Magnon man settled here because he was extremely intelligent and had a highly developed sense of beauty. I believe that in him the religious sense was already highly developed and that it flourished here even if he lived like an animal in the depths of the caves. I believe that this great peaceful region of France will always be a sacred spot for man and that when the cities have killed off the poets this will be the refuge and the cradle of the poets to come. I repeat, it was most important for me to have seen the Dordogne: it gives me hope for the future of the race, for the future of the earth itself. France may one day exist no more, but the Dordogne will live on just as dreams live on and nourish the souls of men.   – ‘The Colossus of Maroussi.’ 1941