14 Juillet en Dordogne…parties & fireworks. Hoping to get out painting tonight (teaching tomorrow) as it is a good paint. Next post is about the English in Dordogne & house prices… & here’s an expert from last year’s bloggy Jour de la Republique… 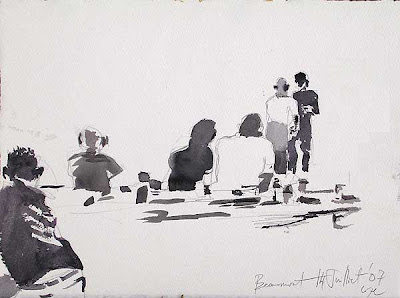 “…Then later on, when the crowd had thinned out, white plastic cups & on-lookers & a few adolescents still eager to play the flirting, mating game. The white tressle tables & black silouhettes making a good tonal subject.”

The historic roots of provincial France

Anyone wanting to better understand the historic roots of provincial France outside of cosmopolitan Paris should read Graham Robb’s The Discovery of France, which is a critical view of ‘La Patrie, La France, La Republique’ aka central government from Paris. For instance, Robb cites that, during the call-up for the Franco-Prussian War in the 1870’s, many men from remote farming hamlets in the Dordogne, didn’t even know their own surname, only their first name…they never had the need for their surname as they never left their hamlet of seven or eight houses… this is very different from the tragic First-World War memorials in every single village where whole families’ names are listed, annihilated by tragic war.