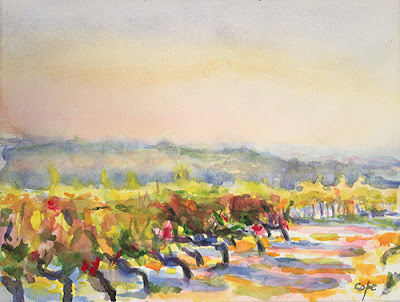 ‘Plantou – Sunset II’
Watercolour.
42 x 38cm (15 x 11 inches).
© The Artist.
sold
There’s a ‘Route des Vins’ organised by Xavier at Counseil Interprofessionelle des Vins de la Region Bergerac. It’s a good wheeze. You get to visit the caves & chateaux & do some wine tasting. they have posh bordeaux red signs outside their properties… and do you know that yesterday, when I painted this wc, I read the sign carefully for the first time ever. It goes ‘Tertre du Plantou’ and not ‘Le Plantou’ as I was saying in the las post (oh listen carefully, all you attentitive, careful, close reading internet readers…or bouncing surfers).Apparently ‘une tertre’ is a small round hill, which was frequently used as a Roman encampment. The ‘Plantou’ part becomes evident when you become familar with the occitan turn of phase that puts a ‘ou’ or ‘lou’ ending on the end of a noun, such ‘cayrou’, which in the local dialect means peeble or stone, or in the langue d’oil or proper Parisian French ‘caillou’ Bad example as this has an ‘-ou’ ending as well. So there are many place names such as ‘Lou Cayrou’ in the stoney Lot. Here on this hill, the soil is a fertile wedding cake of molasses with horizontal chalk. It smells goood. ‘Lou Plantou’

I go into this digression about place names as they often contain something of ‘the Spirit of the Place’ in them. And getting the feel of the place is important for good plein-air painting. So here is a watercolour of a wonderfully fertile south/south-west facing hill in Aquitaine, one misty sunny sunset in the time of the vendanges.

Here is an oil from two years ago. It shows a row of cabernet franc on the south slope of Le Plantou. 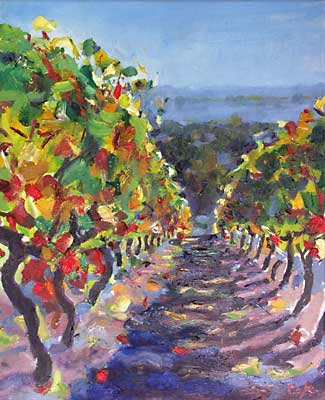