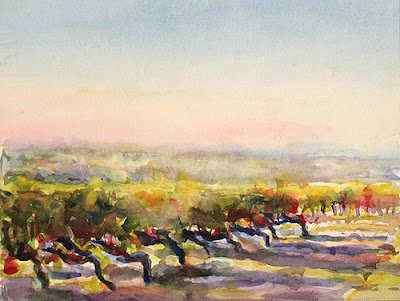 ‘Le Plantou’ is the name of a hill, just under Boisse (which is a village situated on another hill) near Issigeac (which is the town near me). it’s a round hummock-type of a hill, rather like a breast, with a swelling concave profile. The vines on its south side are planted north-south running down the hill. I ilke how wine is often named after the name of place. This was painted chez-Bellugue, whose ‘Le Plantou’ is one of my favourite Côtes de Bergerac. Interestingly enough, the stocks are old, ( and are pruned more like chasslais Moissac grapes), and are not densely planted. Which partly allows them to make grapes & thus wine of an intense flavour. The Cötes de Begerac appellation was only recently introduced a few years ago (kind of a way of avoiding all that ‘premier grand cru’ ‘deuxieme grand cru’ ranking that goes on in some Bordeaux wines) and one of the exigences of qualifying for it is that the wine stocks aren’t planted too densely.

Le Plantou is also the last wine making area of the Bergerac appellation heading east. Nothing till you arrive at the Cahors appellation, which is about sixty kilometres away. It’s funny how much wines from here have a hint of Cahors, whilst wines from the west of the Bergerac region, going downstream of the Dordogne towards Bordeaux, have a hint of St Emilln in the too. That is one of the main tenets of the French Appellation system – that a wine should have the flavour of its soil. I sometimes wonder if this principal might apply to painting as well? 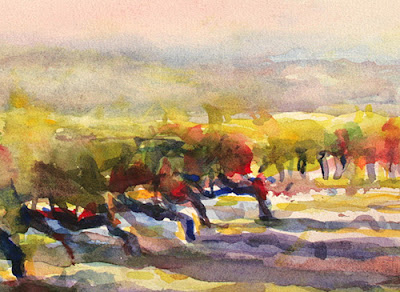