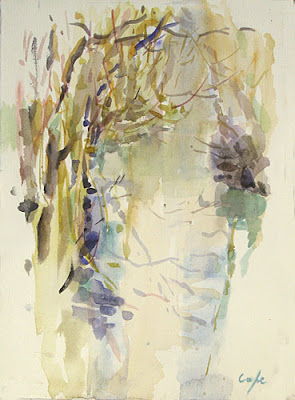 15 x 11″ – 28 x 38 cm
Tanglewood. A bird song corridor through an empty land. Sluggish shallow river. Old roots holding the banks together. Old place, old beings. Being quiet here… the Dropt has an intimate & hidden charm, different from the majestic Dordogne with it’s mighty flow. Being quiet here & now … even in a modest landscape, a hidden corner. One of the last spaces for nature in our monetised countryside.

Wendell Berry on Local Care of Shared Places:”My wife, Tanya, and I were just in Massachusetts visiting with a friend of ours, Rachel Fletcher, who had organized some of her neighbors in her town to make a “riverwalk.”

A little river runs right through the middle of her town. For maybe generations people had looked at the river the way we Americans have learned to look at rivers—as something to carry things away that we don’t want. The town had just tumbled whatever they didn’t want down among the trees on the river bank.

Rachel began to persuade people to allow a riverwalk to be built across their back lots. She organized cleanups, and people would come and bring their children. They picked up all the trash and cleared the river bank and built their walk, and they made a beautiful thing.

Any walk through the woods gives one a lot to look at, especially a walk along a riverbank. People made donations to put in seats in memory of loved ones who had died and so on. That was how it started.

The next thing that happened was that people who had property on the other side of the river, who weren’t organized into this effort at all, began to clean up their lots. So here you’ve got a neighborhood institution that is minimally organized. So far as I know, it has no trust fund. But it’s cherishing something local that everybody can have in common, and to me a thing like that can’t go wrong. It’s just a little narrow walkway, scaled right, but it’s an enormously suggestive thing.

It was a way for people in the neighborhood to give days of their labor to one another, to give one another shares in their mutual place, to make a place where they would meet each other without agenda or schedule. And as the cleanup across the river would indicate, it has an influence.

So that’s the way my instinct says to work. If you believe in goodness, if you believe that goodness has a power, then why not act on your faith and do something good and see if it won’t call forth more goodness?”