I took a photo of this prehistoric artifact at the Museum of Pech-Merle this spring, when they had an exhibition about the stars & prehistory. Regrettably I didn’t get the provenance (I think it might be a find from the Castel Merle grotte). It’s a ‘mobile’ portable artifact, which some interpret as a moon calendar . The moon has a 29 day cycle so observe that there could be 14 notches on the first row depending on what one counts, & that maybe the deviation in row two into a circle rather than a row, was meant to be indicative of the disappearing or empty moon?

For me nature is not landscape, but the dynamism of visual forces.. an event rather than an appearance. These forces can only be tackled by treating color and form as ultimate identities, freeing them from all descriptive or functional roles. _ Bridget Riley

One of the primary concerns of any aesthetic response is that one stops at the image or artifact, rather than immediately transcending it into an interpretation or meaning, which thus ‘dematerialising’ it. An artwork should have ‘presence’. This presence is its indisputable & physical reality. It asserts its independant & immanent existance, other & above any interpration that the onlooker may bring to it or find via inspiration. OK – meanings will evolve out this fact of material man-made presence. People will interpret it as they will. A certain amount of meaning will be conveyed for the most part to the majority of an audience in one moment of cultural history.

People want to find a “meaning” in everything and everyone. That’s thedisease of our age, an age that is anything but practical but believes itself to be more practical than any other age. – Picasso

Meanings change. Cultures change. But a beautifully made object will always have a certain fascination.

The pin holes are very fine on the obove abject. Paleohistoric creators used to have a special napped stone-tool for drilling holes in sea-shells for jewellery & leather for clothes.

Art is made to disturb. Science reassures. There is only one valuable thing in art: the thing you cannot explain. – Braque “They were aware of all the rhythms of nature. Their survival depended on them.” – Dr Michael Rappenglueck

Dr Michael Rappenglueck, of the University of Munich, intreprets Lascaux as astrological. Which is contary to what Jean Clottes was asserting as I quoted him in the last post here. Also, obcure, arcane & nearly inpenetrable as I personally found it, mythologist & specialist in Shamanism, Mircea Eliade in his book ‘The Myth of the Eternal Return’ does make the point about the cyclical rebirth of moon being a universal constant image of …?

It doesn’t seem wild speculation to suppose that, after day & night, the moon’s cycle should be an obivious way of counting time. The English used a thirteen moon calendar right up to Tudor times, despite the official calendars of the ruling & learned classes. Urban life, with lit up evenings infront of the television misses the close contact the our ancestors had with the night sky. 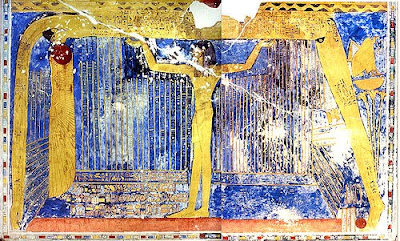 ‘Book of Nut’
Tomb of Ramoses IV
Valley of the Kings

Another great image on a ceiling to which Lascaux is frequently compared to is the Sistine Chapel. Note the stress on the word ‘ceiling’ as in cave art you frequently have to bend the neck & look upwards. The same gesture is required to look at the stars (unless of course you lay down on your back). Personally I prefer to compare Lascaux to the astrological ceiling calendars of Ancient Egypt, such as the Book of Nut in Ramoses IV tomb or the great ‘stargate’ Zodiac of the Temple of Hathor at Denadra, which is now in the Louvre.