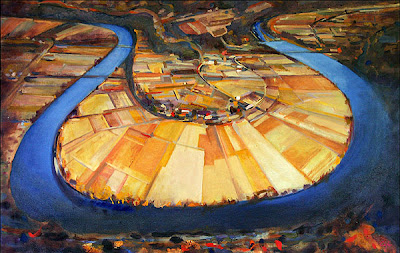 Carrying on with this rambling musing about painting, photography & postcards/plein air….Describing something of the process by which I arrived at this (popular) oil painting might be of interest… or not (deafening silence on the internet ,thanks for your comments!). Personally I like to see ‘work in progress’ , especially that which follows something of a turning, twisting path, where the end is not forseen, where one feels one’s way, sometimes in the dark.

Yann Arthus-Bertrand & views from the sky

I painted this in the studio one wet, dark, long rainy winter. Not a plein air piece as it’s a view from the sky… couldn’t convince the microlite to stay still long enough! Yann Arthus-Bertrand fever had struck France; even my cheque book from ‘La Poste’ had his photographs of ariel views of landscapes. They frequently resemble ‘cadastres’ (territory maps of plots of land ) rather than pretty postcard views. I painted this from a postcard, an ariel view of this famous meander. But first I seriously ‘doctored’ it in Photoshop before painting it in this large format studio painting. 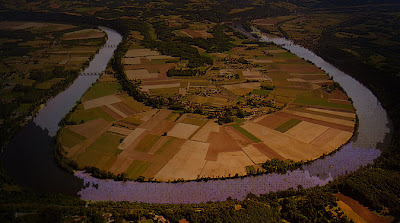 I’ve always had an uneasy relationship with these little images or ‘cliches’ called postcards, part fascination, part desire to deconstruct, part desire to find the same view in the real world… This wasn’t the first time, as I had already spent another winter painting postcards wayback in the early 1990’s with my ‘Postcards from Babylon’ series of 24 minature oil paintings, the size of tiny postcards 15 X 10 cm.

The colour scheme for ‘Tremolat’ has a night-time feel to it, or maybe a like a shaft of light breaking through in a storm or something – ‘Quand le Diable marit ses filles’ (when the Devil marries his daughters) as they say in these ‘ere parts, referring to a mix of sun, humidity & rain. I did this study from imagination & memory, and in fact even imagination & memory act in the the large painting as well. A sculptor friend of mine remarked on the exaggerated perspective in the river bends & the way the bottom bank of the river is ‘lost’. I did this consciously & deliberately to exaggerate the swelling … during this time my wife was pregnant. Art historians occasionally remark on how the personal & private (I like to keep it private though I do always seem to be making an exhibition of myself) lives of artists effect on their paintings, such as Constable & the death of his wife in his ‘Hadleigh Castle’ for instance.