This is an old stone house built into a cliff face, ‘une maison souterraine’ (literally a subterrian house), which I guess is a better real estate address than ‘une maison troglodyte’ (a troglodyte’s house).It’s the next cliff face on from that of La Gravette in the Couze valley. Périgord (which is more or less the Dordogne) was densely populated in prehistoric times. La Gravette was the archaeological site that gave the name to The Gravettian Period (of human history, which spans some 7000 years, between 28 000 and 21 000 years ago. It was a warm period between the two ice ages, but all the same, life huddled up against this south-west facing rock face must have been very different from modern comfort. Fire was important these hunter-gathers & “remarkably the first fired objects were not pots, but figurines (mostly carnivores) & humans (mostly women)” – Prehistoric Art by Randall White, Pub. Abrams, 2003 .

The above is the ‘Venus of Monpazier’ which is winy, small venus, found not far La Gravette. About 25 kilometres away (a day’s walk). In an open ploughed field. I talked to the man who discovered her. Apparently, he was just out walking. Upon finding her, he fell in love with ‘archeology’ & history. You can see a replica of her in L’Atelier des Bastides, Monpazier.
You can read more about her in Jean Clottes – Voyage en Préhistoire. Editeur: La Maison des Roches.

Other great achievements of this period was much body ornamentation & great ingenuity in making flint tools (I once found a solutrean spearhead lying on the ground, on the surface, right besides my foot, once whilst out painting. As it wasn’t from a acheological layer & had come to o the surface, it didn’t have much value as evidence).

What I like about many of the prehistoric sites in Périgord is that they are still inhabited to this day. 28 000 years of continued settlement. Some changes like the chickens picking away in the foreground & the pruning of the fruit trees (The Gravettian was pre-agriculture) , the odd bit of metal (stone age not metal age), a square window, some faced stone (though I bet they spread hides down from the cliff face in the same manner as this roof), but other than that, not much change. Sometimes, whilst painting quietly in these places, I imagine I can feel the continuity. Maybe there’s a need to reconnect with our sources in our modern, contemporary period, when there is much anxiety about man’s impact on the planet? 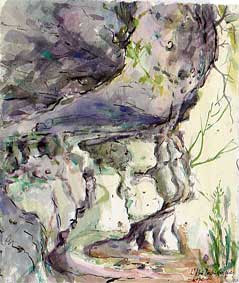