‘Font de Gaume’ 2004
Ink & Watercolour.
double spread A5 sketchbook
© The Artist.
Ne jamais dire “Fontaine, je ne boirai pas de ton eau” – Périgordien Populaire
Font de Gaume is probably the most famous prehistoric painted ‘grotte’ (cave) in Les Eyzies (go abit further up the Vezérè & you arrive at Lascaux).It’s geography is very much like that of the rest of Les Eyzies, including that of Le Grand Roc. Hard limestone that has been eroded by the river to form wierd overhanging ‘lips’. The different levels of the river over the various ice ages etc has sculpted the characteristic ‘s’ type curves (very Van Gogh). 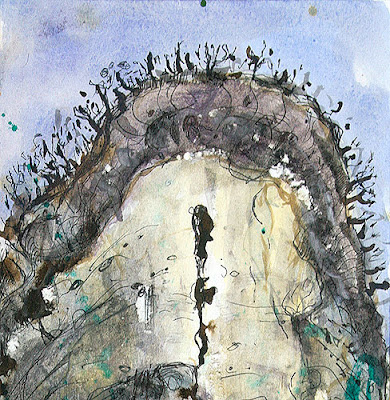 Detail :note I’m using a roller ball pen by 2004 & saving the ‘spider-webs’ of nib for the really important bits.

If you follow the ‘crack’ or the stain down you arrive at the level at which there was once an underground river, which formed an underground gallery going back quiet so way through the rock but having deposited a fair bit of soil etc upon it’s retreat. It is now dry.

Follow the crack down & go up and into gallery… 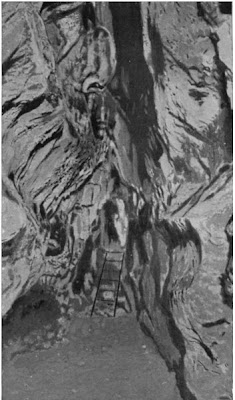 I love that ladder! Not at all like the modern day museum trappings of book shop, postcards & disgruntled ticket salespersons.

Go into the labyrinth to meet your monster… 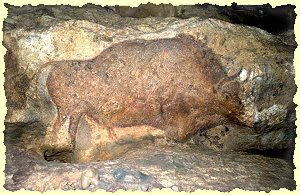 ….. who is the crowning glory of late Prehistoric Cave Art (whoops, sorry we aren’t allowed to call it ‘art’ any more according to some archeologists 😉 It’s some 15 000 years on from the ‘western european creative explosion’ of Chauvet…

…isn’t he just the most finest of beasts!

Here’s what wikipedia has to say:

Prehistoric people living in the Dordogne Valley first settled in the mouth of Font de Gaume around 25,000 BC. The cave mouth was inhabited at least sporadically for the next several thousand years. However, after the original prehistoric inhabitants left, the cave was forgotten until the nineteenth century when local people again began to visit the cave.

In 1901, Denis Peyrony, a school teacher from Les Eyzies, discovered the paintings inside Font de Gaume. The paintings date from around 17000 BC, during the Magdalénien period. However, many of the cave’s paintings were discovered much later. The cave’s most famous painting, a frieze of five bison was discovered accidentally in 1966 while scientists were cleaning the cave.

Adam says : Little bit light about Perony. He was a great Perigordien scholar of Prehistory, as well as something of a classifer & conservatist. His survey of 1949 is generally taken to be the middle-of-the-century inventory of sites. No doubt he knew L’Abbé de Gorgue of le Chateau de Lanquais, who was another passionate Perigordien scholar of Prehistory, & a Baron as well. Remember this is the same generation as Lord Howard & the Tutankhamun discoveries in the 1920’s.