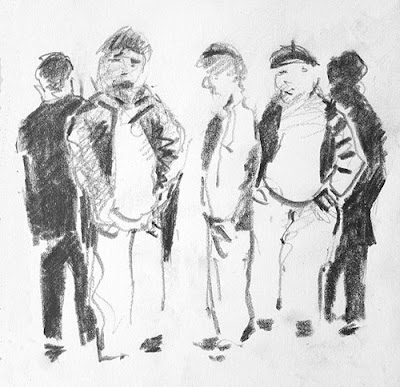 I’m off to Paris for a week or so , so no blogging , no computers for a bit.

Intend to speak to the gallery close to the Pompidou Centre which is interested in exhibiting my work. (though I suspect that maybe I’ve gone to ‘traditional’ / ‘rural’ for the owner’s taste?)

Exhibiting in the big towns again? Maybe I can’t be bothered to leave my wilderness here in the Dordogne? Big towns often equals big headaches as far as getting a show up is concerned.

Maybe it is not the time to go for me to go back into the big town galleries? Ecomonic recession… Anyway, any show won’t be for this year & probably not 2009 either, so maybe the bust will be edging back to boom by then.

Must confess to having much enjoyed NOT exhibiting in London these last five years, where I used to show at the Richmond Hill Gallery & the Studio Gallery. Haven’t put in for any national competitions either these last five years either, either in France or UK. Deep rural isolation ( & it feels good).

Anyway, Paris is lovely. Nice to have a walk about. Despite the recession… so here’s a cartoon to lightened up dark thoughts of recession. To have one’s hands in one’s pockets in colloquial french means to be NOT spending…nor throwing one’s ‘boules’ away carelessly 😉

post script 2013 : the hands are even further buried in the pockets now, the recession rolls on, people are spending less on art