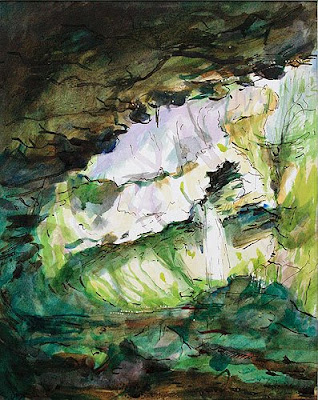 ‘Inside Looking Out’
Watercolour & Ink.
25 x 32cm
© The Artist.
Actually it’s not a cave but an overhang.

The landscape painter must always have two great and distinct ends: the first to induce in the spectator’s mind the faithful conception of any natural objects whatsoever; the second, to guide the spectator’s mind to those objects most worthy of contemplation, and to inform him of the thoughts and feelings with which these were regarded by the artist himself” (3.132).

…Although Ruskin begins by speaking as though the painter must always work toward two ends — to present the facts and the emotion caused by the facts — he quickly makes it apparent that all art follows, primarily, one end or the other:

‘ In attaining the first end the painter only places the spectator where he stands himself; he sets him before the landscape and leaves him…. But in attaining the second end, the artist not only places the spectator, but talks to him; makes him a sharer in his own strong feelings and quick thoughts. . . and leaves him more than delighted, — ennobled and instructed, under the sense of having held communion with a new mind, and having been endowed for a time with the keen perception and the impetuous emotions of a nobler and more penetrating.  RUSKIN – Modern Painters