Crazy cliff faces that I wrote about in ‘how-to-draw-rocks’ & elsewhere… click on the rock category to see them all. The above watercolour portrays a prehistoric shelter. These ancient places for me feel charged with … our beginnings as a species. What was once there & what might be there one day.Note the bluish greenish tint. There’s a type mold that forms on the never-sunny parts. Copper sulphate? You can watch the cliffs light up in the sunlight & grow blue in the shade. I’m assured it’s not purely optical but chemical too… Always walk on the sunny side of the street!I had an interesting conversation with a rock climber yesterday. Funny how one can talk for along time about geology & rock faces. I suppose most people don’t spend alot of time looking closely at things that don’t interest them. Hence they won’t recognise them when they are portrayed in painting. Rocks & cliffs interest me, which is great as the Dordogne & the Lot has some fantastic limestone & limonite geology.

John Ruskin (1819–1900) was another artist who was mad about rocks. He was a lake-lander (the Lake District in the UK. I used to walk & watercolour there whilst at Newcastle University :-). He also an in-depth student of geology & amassed a comprehensive collection of rocks & minerals.

If only the Geologists would let me alone, I could do very well, but those dreadful Hammers! I hear the clink of them at the end of every cadence of Bible verses and on the other side, these unhappy, blinking Puseyisms; men trying to do right and losing their very humanity – Ruskin

He paid very great attention to detail, lovingly, as if each ripple & blow hole was significative of ‘The Hand of God’. So much so that he was criticised by an Parisienne asethete for ‘having the eyes of a bird’ (ie he saw only details & not wholes). But map making & exactitude, for me, is an important element of respecting ‘the spirit of the place’. Even the wildest flights of imagination are more convincingly portrayed in painting when yoked with a real & close observation of ‘the facts’.

Look at this great pen & ink from the Ashmolean, Oxford. I’ve not seen this one ‘in the flesh’ (wish that Wiki would note it’s dimensions! decontextualised internet…). A monochrome of great power. At a guess I would say at least two sittings, maybe of about tree hours each. Maybe more. One of the many things I adamire about Ruskin’s painting is that you rarely feel rushed. He would just leave the piece unfinished, incomplete rather than rush or ‘fill-in’. 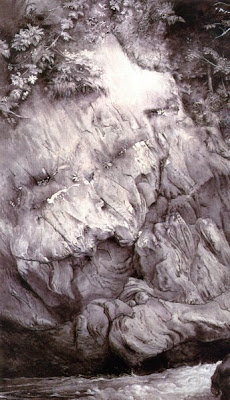 John Ruskin (1819-1900)
Study of Gneiss Rock, Glenfinlas, 1853
Pen and ink and wash with Chinese ink on paper
Ashmolean Museum, Oxford, England.
Photo credit : wiki commons
It’s in this kind of vein that I painted my ‘Spirit of the Valley’.