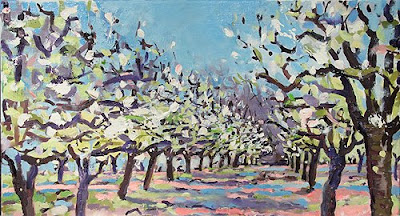 Wholly in proportion to the intensity of feeling which you bring to the subject you have chosen, will be the depth and justice of your perception of its character (16.370) Modern PaintersThere is reciprocal action between the intensity of moral feeling and the power of imagination; for, on the one hand, those who have keenest sympathy are those who look closest and pierce deepest, and hold securest; and on the other, those who have so pierced and seen the melancholy deeps of things are filled with the most intense passion and gentleness of sympathy”(4.257). Modern Painters

The virtue of the Imagination is its reaching, by intuition and intensity of gaze (not by reasoning, but by its authoritative opening and revealing power), a more essential truth than is seen at the surface of things (4.284). Modern Painters