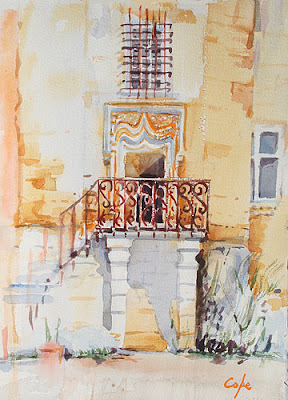 This was a demonstration painting from last week’s painting course in the Chateau de Lanquais.
I’ve frequently commented on the importance of demonstrations. If you want to learn to paint, go see a demo from someone who knows how to paint. Worth a thousand words or a million bulletin points. Their knowledge is in their hands & their gestes. You see just how the another artist goes about making a painting (which is of course just what a teacher as well also gets to do whilst watching his students paint!), how the painting unfolds, and even better, you are also in front of the subject matter ‘sur le vif’ .A book can never give you this.

“I don’t do railings”

There’s a funny story that goes along with the above demo piece. One of the group chirped out “bet you’ve painted that doorway a few times already”, which was true, for I had already painted as a demo once beforehand.

There’s the problem of those pesky railings in front of the entrance on the balcony… not only incredibly fiddly but all upright & regular, with a lot of drawing but also with the added problem of them being light railings in front of a dark door. light over dark. Tiger territory. And when asked by a student about the railings, I spontaneously blurted out “I don’t do railings”, which caused much laughter. Important point however… you don’t have to put in everything you see. There’s some editorial scope for exclusion as well. At least, to identify the areas with which you feel there’s gonna be scope for making a error. Try not to mistakes in public (advice to a blogger). 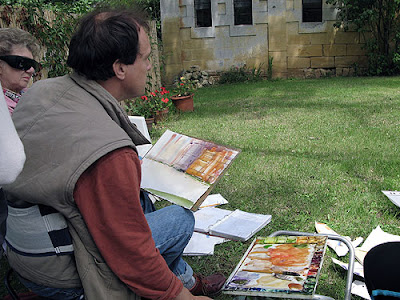 So, below, there’s the demo piece.

From quite a few years back. 2002. In this one, I did exclude the railings. Cut them off. Whipped them out.

This time, there was a remark from an ex-architect “You’ll be lucky!” – who saw me painting it straight in with the brush, without any underdrawing. I don’t know if I was but what did happen was that I reverted from a transparent palette of cobalt blue & raw sienna such as used in the above, to a heavily opaque palette of cadmium yellow & a blue shade of iron red. Even the ‘watercolour sin’ of using acrylic. Covering up one’s mistakes? Making your mistakes in public? To do railings or not do railings…. (note the fade-out on the railings that go down the stairs in the first demo piece. Compromise & suggestion is possible, n’est pas?). 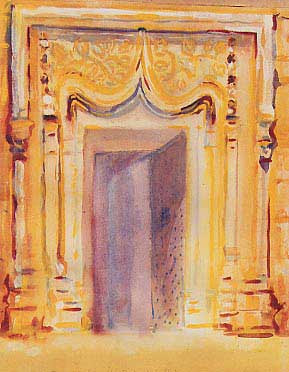