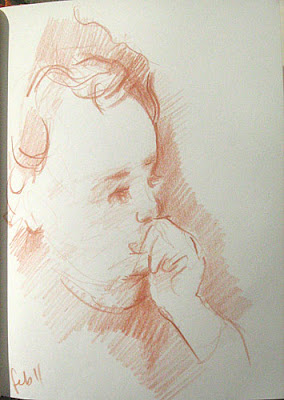 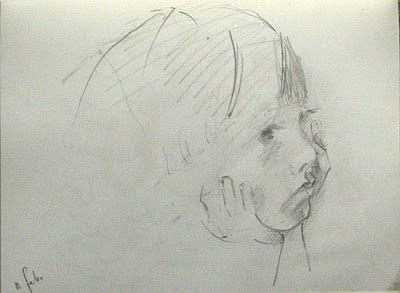 Intimate Portraits by Artist’s of Their Own Children

I overheard on the web some artists saying that they couldn’t possibly do portraits of their own kids as it was ‘too close.’  I don’t agree. Neither did a lot of artists much more well know & much more further on down the artist’s path than I. Be they Mums or be they Dads. Often that extra intimacy with the model makes for a magic that isn’t found in more run of the mill portraits. Watching one’s own children is one of the treasures of parenting.

Take Augustus John’s portraits of his children for example.  Here’s one of his son Robin (1912). A real boy if ever there was. Glaring firely out of the painting, obiviously not far-off from a tantrum:

Another favourite of mine are Matisse’s portraits of his son Pauln (done from memory I seem to remember):

Cézanne’s son Paul (how did he get him to sit so so so very still for so so long?):

Then there’s Gainsbourgh’s two daughters ( When I was a little boy, I used to stand before this in the National gallery London with my Granny & laugh. A cabbage white, two sisters & a smile & a little hand reaching out) :

Rembrandt’s kids… maybe this is a scene from family life :

Chardin (wisely skiving off his home-work):

Picasso , of course….many many times over! In some ways, I’m now refinding the greatness of Picasso via his images of his own children… it’s all there : love, play, intimacy, likenesses (consistant over a series & different styles), talent of course… fireworks of course… fun ,as you’d expect from kids 🙂 Here is an image that sings of eternity, of why we parents love our children 🙂 I really didn’t realise that Picasso had done quiet so many paintings of each child, with no thought for commercialism, voyeuristic onlookers,  etc:

And what about all the old paintings of kids …Do we know if they are the children of the artist or somebody else”q children? Some of the Quattrocento drawings of kids are astounding!

Lastly, here’s  a personal favourite of mine : Winifred Nicholson’s painting of her own two kids.

The last word to Kathleen Raine on Winifred Nicholson, (who lived not far from where I trained at Newcastle University UK art school at the same time …I wish I met her!)

… to be with Winifred was to be with a totally committed artist, for whom each day shed its light on a new theme for a painting. The ever-changing light of the seasons, the flowers, the weather, the arrivals and departures of children and grand-children, all these gave her what she called the ‘stories’ of her paintings in which she captured the day, the hour, and ever-fleeting present.  –   Kathleen Raine, quoted by Alice Strang, Winifred Nicholson, National Galleries of Scotland, Edinburgh, 2003 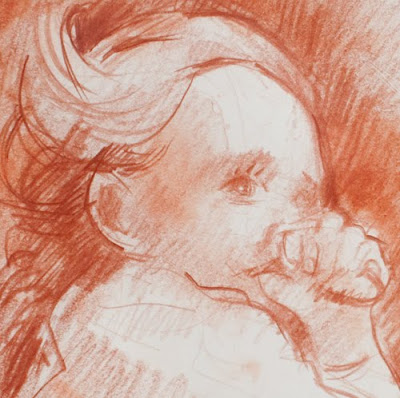