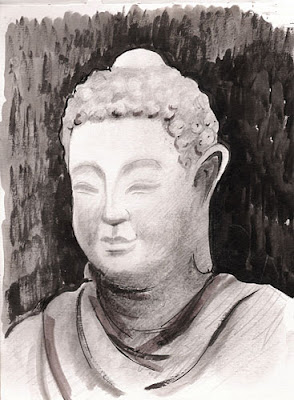 (…) dharma art refers to art that springs from a certain state of mind on the part of the artist that could be called the meditative state. It is an attitude of directness and unselfconsciousness in one’s creative work. -Tibetan meditation master, the XIth Chögyam Trungpa Rinpoche

Freezing cold weather so not quiet a meditative state, more of a frozen state.
Another smile from across the sands of time. 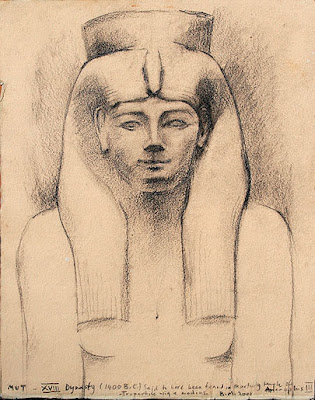 “But now, after my recent travels in Egypt, these fragments in the museum seemed displaced and uprooted, somehow diminished and made smaller.

…the sands of time….

One element however manages to cross the sands of time and remain intact, despite the ravages of plunder & the displacement of uprooted museum collections. It is the Egyptian smile in the face of eternity.
::
The expression on the face of this sculpture is the work of a great artist, full of mystery and interior life, fuller than those pert, self-assured later Ramassidian smiles. The restorers have done a wonderful job in piecing together these fragments, which are said to have been found in the mortuary temple of Amenophis III (circa 1400BC).
She is MUT, Goddess, adored of Thebes, Feminine Divine, consort of Amun-Ra, mother of Khons the Moon-child, World Mother, Anima Mundi.
In some ways the act of drawing is akin to the act of worship. To draw is to love, and in loving we carry our breathe of life and enter, fuse with the adored. They say that the Gods need us so as not to be forgotten, and it is with semen of worship that the grain of the Divine is brought to life. Almost as if the sculpted stone itself, the inert granite becomes flesh. Picasso said ” un tableau ne vit que par celui qui le regard”( “a painting only lives in the eye of the beholder”). The museum shut its doors but I could not leave… Casting one last look back, it seemed to me that the Goddess Mut was shimmering, forever smiling.”