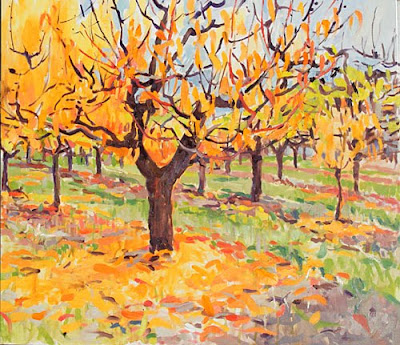 These two paintings are a pair, or to use the proper word for a pair of paintings, a diptych (OK so the’re not hinged together as most medieval Diptychs were). Right from the beginning, in the conception phase of making a picture (“There are two things in the painter, the eye and the mind; each of them should aid the other.”-Cezanne), they were conceived of as a being together. The same subject but from a slightly different view point.
They look something like this when proper hung side by sides as I intended, Doesn’t internet rip paintings apart!

Not the first inkling of this idea for me:

This diptych from 2007 (happily sold together & still hanging together)

Cézanne said he could find a hundred different paintings just by slightly inclining his neck & seeing the same subject from a different angle. The quote starts off ‘here by the river bank…” so he’s talking about a more humble subject than the grand Mont St. Victoire of which he mamnged to do at least forty oils & at least as many watercolours. What’s that in terms of Diptychs???!! 😉

I stalk around my subject from all angles & it still surprises me that things appear to move about when I move about. Really curious, this… Amazes me more & more, certainly the more I’m aware f it. That they seem to shift like astral objects, sometimes conjuncting, other times eclipsing. Don’t take this for granted, as it really is a very strange happening when you look at it as if for the first time. It’s called PARALLAX. Go out & try it. Try it with one eye open. Try it with both eyes open. Choosing a good spot is central to plein-air painting. Too many times in bad paintings this curious shifting world seems ‘fixed’, rendered immobile, ‘un-paralaxed’ into a static ‘full-frontal’ elevation, a mind’s eye summary of the object & not the reality of the real world where things overlap & bump into each other & (appear to) shift when we shift.

A simple everyday example of parallax can be seen in the dashboard of motor vehicles that use a “needle” type speedometer gauge (when the needle is mounted in front of its dial scale in a way that leaves a noticeable spacing between them). When viewed from directly in front, the speed may show 60 (i.e. the needle appears against the ’60’ mark on the dial behind); but when viewed from the passenger seat (i.e. from an oblique angle) the needle can appear against a slightly lower or higher mark (depending on whether it is viewed from the left or from the right), because of the combined effect of the spacing and the angle of view.

Because the eyes of humans and other highly evolved animals are in different positions on the head, they present different views simultaneously. This is the basis of stereopsis, the process by which the brain exploits the parallax due to the different views from the eye to gain depth perception and estimate distances to objects. Animals also use motion parallax, in which the animal (or just the head) moves to gain different viewpoints. For example, pigeons (whose eyes do not have overlapping fields of view and thus cannot use stereopsis) bob their heads up and down to see depth.