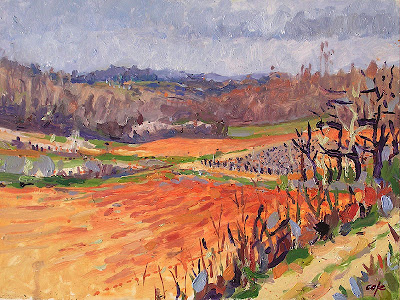 Another thing surprising thing about the Quercy Blanc region is ‘La Terre Rouge’, the red soil that seeps out from underneath the white chalk strata. It’s a heavy clay soil rich in rust (red iron oxide).
In the mid-ground, you can just about make out a field of malbec vines planted in this rich red soil. The wine is ‘Appellation de Cahors, which is sometimes also known as ‘La Sang de France’ – or the blood of France.