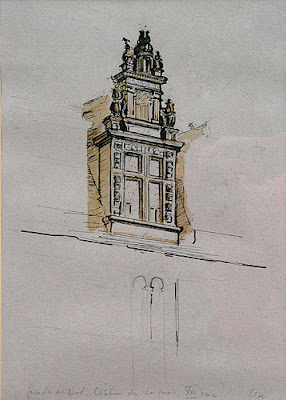 Pencil, ink & felt tips.
approx 30 x 40 cm
Tous Droits Reserves. © The Artist.
Here’s another drawing of Lanquais. From a few years ago but still with the felt tips. Maybe more of feel of a technical drawing than my current craze for squiggles & speed. My ‘post-railings period’ if you like 😉
The orange tinge is in fact my reflection in the glass of the frame, as I couldn’t be bothered to take it out of the frame so as to photograph it.

The architecture of the renaissance palais at Lanquais  is attributed to Pierre Lescot, who definitely worked on the Louvre. But there’s no written evidence like bills or attributes of him working at Lanquais, none that I know of.

It is a good example of how the ideas of the French school of Italinate Renaissance Architecture were interpreted in the provinces, far from Paris & more importantly, far from the Court at Versailles & Chambord. The Perigordien imagination remains somewhat closer to nature, rustic if you like . The best example of this must be the  ceramist-garden architect Bernard Palissy, who was contemporary to Lescot.  Palissy  also worked on the grotte in the gardens of the Louvres (now sadly disappeared). It’s not unimaginable that these two architects , both working in Paris at more or less the same time, might have known each other.

Except Pélissey was a protestant huegneot, who later had his head chopped off after being tortured in the Bastille. St. Bathelomny not only killed humans but cut through France’s cultural, creative diversity. The Château de Lanquais was a catholic, royalist strong hold of the new in-laws of Ctaherine de Medici in the south west, which was huegenot & armagnac, and woul deventually give rise to Henri IV.

Another Perigordien architect of note of the same period was Souffran, to whom Chateau de Cadaillac is attributed (with documentary evidence). Certainly the elevations of Cardaillac are a much stricter affair than the near-fantastic decorations of the lucarnes (bay windows like dormer windows) at Lanquais (note the crow on the uppermost finniale).