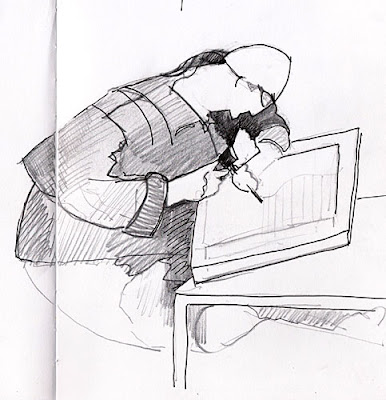 ‘Busker – sculptor on the streets’
A5 sketchbook
This sculptor carving on the streets on market day (else he’d get moved on by the gendarmes) at Castillonnés.

Drawing ‘sur la vif’ moving targets. I’ve observed one tendancy , that which I call my ‘Hieratic Style’, as if an Egpytian or Modernist freeze ‘à la Zadkine’. It’s stylised & anti-illusionistic. 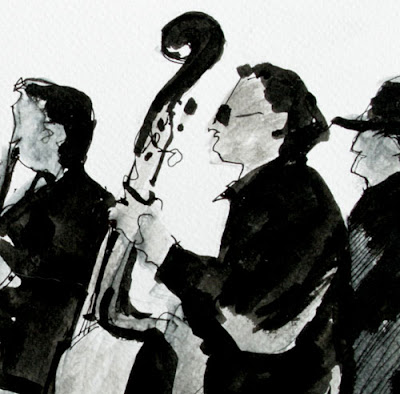 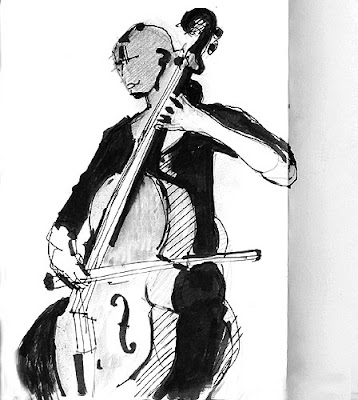 Static, it’s the oppostite of the gestural or the dynamic… 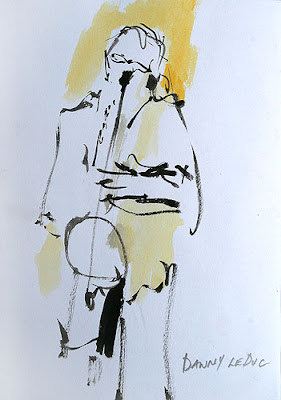 Just an observation, these drawings happen so quickly, less than a few minutes, so not much time to think, just draw.

“It was primarily written in ink with a reed brush on papyrus, allowing scribes to write quickly without resorting to the time-consuming hieroglyphs” – http://en.wikipedia.org/wiki/Hieratic

–adjective
1.
Also, hi·er·at·i·cal. of or pertaining to priests or the priesthood; sacerdotal; priestly.
2.
noting or pertaining to a form of ancient Egyptian writing consisting of abridged forms of hieroglyphics, used by the priests in their records.
3.
noting or pertaining to certain styles in art in which the representations or methods are fixed by or as if by religious tradition.
4.
highly restrained or severe in emotional import: Some of the more hieratic sculptures leave the viewer curiously unmoved.” http://dictionary.reference.com/browse/hieratic
Zadkine

BTW, Zadkine ‘retired’ from Paris to the deepest countryside of SW France in the Lot at a little village called Les Arques. Not far from me. Great place to visit.