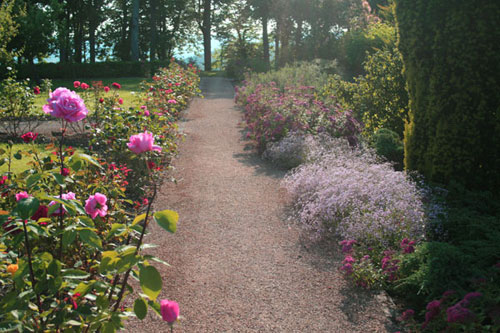 The two weeks at Beduer were sunny but not too hot …. except for one only morning of light rain, where I got to demonstrate acrylics & grey mid-tones…lol 😉 Every year I try to present a new subject so as not to be repetitious. This year in watercolour it was brush & colour; in opaque mediums, it was colourist vs tonalist lay-ins. This follows on from the often expressed desire ‘to be able to paint looser & freer.’  You might have heard me express my agreement with Ruskin that ‘slow diligence’ is the beginner’s best friend.

Thing is … that painting is a practice, not so much a theory. It’s something you do, maybe the understanding comes slowly afterwards…I hope you know that feeling the morning after a day of painting … that goes  that pulls you look at what you painted the day before. It’s something like curiousity. Did I do that? Then the evaluation…that’s not so bad after all, phew!! Maybe a little bit of satisfaction…If not, well, ahhemm… try again. 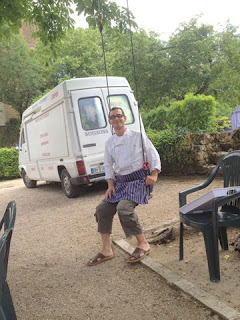 The main news of 2012 must surely Eric, our new chef. Eric has run his own restaurant, chefed for the poshest golf in the Dordogne as well as worked in Paris & Chelsea, London. He knows the palette of the South West to perfection. Just fabulous to work with such a professional, such a good humoured & talented chef. We sure ate well! He laugh & joked, cooked up delicious meals & just dealt with everything like the real pro that he is. He understands hospitality. By the end of the week, there was a a tear or two, when happy-holiday-makers had to finally leave his wonderful, good humoured table.

A variant of ratouille created by Eric; Rosé d’Aquitaine 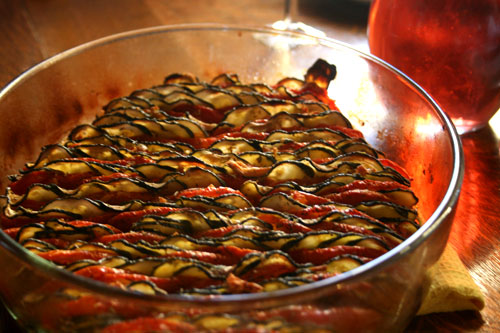 An example of a menu maybe:

‘I had a great time and learnt loads, which is pretty amazing since I was eating and drinking so much and socialising. It was just such a great holiday.’ – Karen, Australia, 2012

Please note that those wishing to come for two weeks back to back might wish to think about doing the first week at our new venue, Saint Avit Séniuer

We are now open for bookings. Please ask for a booking form. Bookings are already coming in so don’t leave it too late.

GROUP BOOKINGS :  why not bring all your art group?!  For four or more painters, a 50 euro reduction per painter. For a group of six, seventh painter at half price 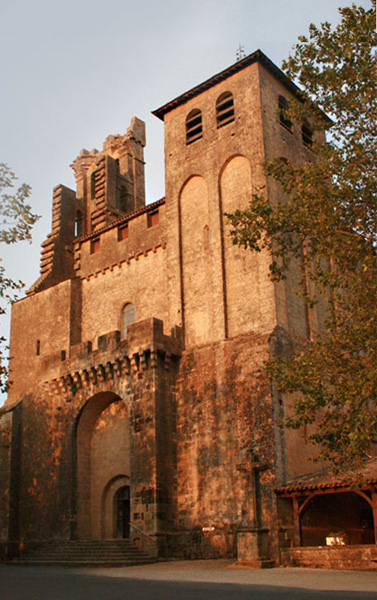 It is a World-Heritage UNESCO listed site, a fortified abbey dating from the eleventh century.

Truly amazing feeling to the place.
A major stop on the pilgrim’s way St.Jacques de Compostella. Medieval frescoes.
We have the exclusive use of the seventeenth century presbytery  as our studio, inside the beautiful abbey grounds.

Very easy to get to – up to nine flights a week to Bergerac airport from the UK, Amsterdam, Paris. Pick-up & drop-off to airport (30 minutes) included in the price. 1.5 hours by train from Bordeaux.

Here is the link to the web-pages which will give all the info you need.
Painting Holidays at Saint Avit Sénieur

PRICES FOR SAINT AVIT : This holiday is organised slightly differently than Beduer, in that we don’t offer an all-inclusive price. You pay the chambres d’hotes directly for the b&b and for four evening meals. For the other meals you pay directly the restaurants. This works out cheaper for you. The total price is somewhere around 850 euros, which is the cheapest on the market.

This is where I now post sketches, watercolours & paintings as well as the odd arty thought or laugh… come & hang out with ex-painting holiday students 🙂

Hope to see you again 🙂
Wishing you all well

Lots of good discoveries & happiness with your painting 🙂